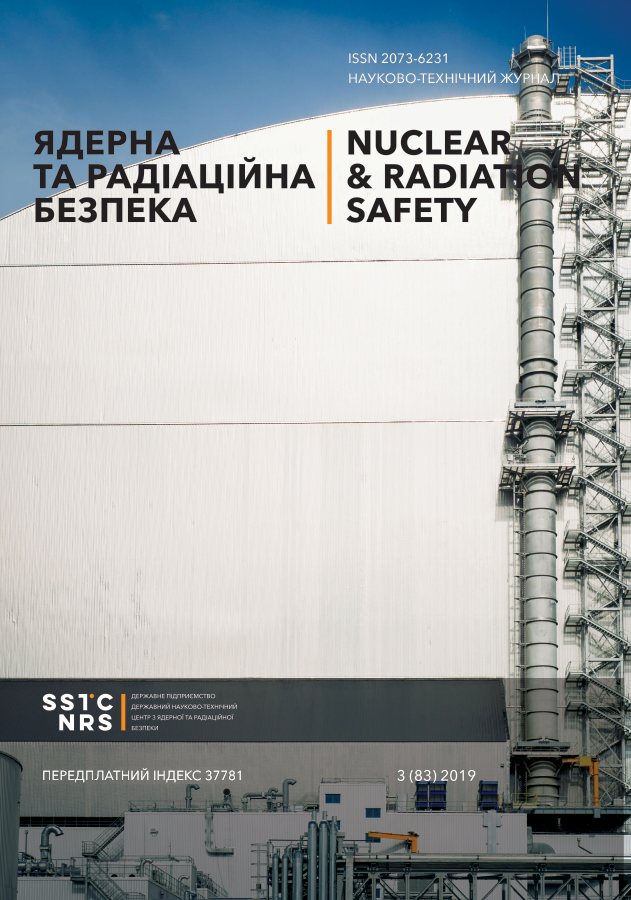 The paper considers this legal area with regard to objects in the nuclear industry in the general context of critical infrastructure protection. It provides the current state in the legal regulation of fundamentals of criminal liability for offences against the critical infrastructure objects in the nuclear industry. The issue on the sufficiency and appropriateness of the existing level of such a liability is discussed further.

In addition, such concepts as “critical infrastructure” (relatively new notion in the national legislation), “unlawful intrusion”, “computer crimes”, “critical information infrastructure” and other concepts important to the nuclear industry were considered in this research. The notions presented in different regulatory documents were analyzed.

The paper emphasizes that the legislation of Ukraine does not currently present special (separate) standards on the criminal liability for offences against critical infrastructure objects. Some promising issues related to fundamentals of the criminal liability and protection of critical infrastructure objects in the nuclear industry were also considered.

The research involves the prospect of further development of a special law to define the area for improving relevant legislation on general regulation of these issues.

The paper also stresses on the need to introduce some changes to the Criminal Code of Ukraine with respect to certain articles of section XIV.

1. About the approval of the Concept for the development of a state system for the critical infrastructure protection. Order of the Cabinet of Ministers of Ukraine No. 1009-r dated 6 December 2017. Retrieved from http://zakon.rada.gov.ua/laws/show/1009-2017-%D1%80

2. On approval of the Procedure for the formation of the list of information and telecommunication systems of critical infrastructure objects of the state. Resolution of the Cabinet of Ministers No. 563 dated 23 August 2016. Retrieved from http://zakon2.rada.gov.ua/laws/show/563-2016-%D0%BF/paran17#n17

3. Ministry of Economic Development and Trade of Ukraine. Official site. Retrieved from http://www.me.gov.ua/Documents/Detail?lang=uk-UA&id=f6481532-9ec0-4ca5-9832-dcc32e31da3c&title=ProektZakonuUkrainiproKritichnuInfrastrukturuTaYiiZakhis

6. On approval of the list of especially important objects of power industry, including areas of the restricted zone and control area of hydraulic structures, which are subject to the protection of departmental paramilitary security services. Resolution of the Cabinet of Ministers of Ukraine No. 575 dated 4 July 2018. Retrieved from http://zakon.rada.gov.ua/laws/show/575-2018-%D0%BF

7. The UN Security Council has just adopted Resolution 2341 initiated by Ukraine on the protection of critical infrastructure against terrorist attacks. Basic facts. Permanent Mission of Ukraine to the United Nations. Retrieved from https://twitter.com/UKRinUN/status/831161881113014272/photo/1

13. On the Judicial System and Status of Judges and procedural laws on additional measures to protect citizens. Law of Ukraine. Bulletin of the Verkhovna Rada of Ukraine, 2014, No. 22, 801.